CPR 3.14 – Does the sanction restricting a late-filed budget to ‘court fees only’ apply to incurred costs as well as to future costs? 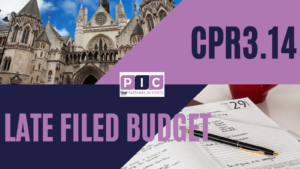 Many reading this may think the answer to this question is trite law (that answer being ‘no’), however they will be surprised to know that some parties, and some judges, believe the answer to be ‘yes’.

PIC conducted the recent appeal case (on behalf of Fry Law) of Hardy v Skeels (4 March 2021, County Court at Stoke) which dealt with the Claimant’s appeal against the District Judge’s decision at Detailed Assessment that incurred costs are also restricted to ‘court fees only’ where a party falls foul of the sanction at CPR 3.14.

A CCMC was listed for 10 May 2019. The Court ordered Budgets to be filed and served seven days before the CCMC, therefore by 2 May. The Claimant filed her budget one day late on 3 May. Five days later on 8 May the Defendant accepted out of time the Claimant’s Part 36 offer which had been made on 10 March 2017, more than two years previously.

The Claimant served her Bill of Costs on the Defendant, who in his Points of Dispute raised that the Claimant had filed her Budget late, automatically triggering the CPR 3.14 sanction and that therefore the Claimant “is only entitled to recover court fees”.

In her Replies, the Claimant submitted it was trite law that the CPR 3.14 sanction only applied to future costs and had no effect on the incurred costs – the Court having no authority to deal with incurred costs as part of the costs management process.

The Defendant responded in Supplemental Points of Dispute, arguing that in Ali v Channel 5 Broadcast Ltd [2018] EWHC 840 the Court accepted that it would undermine the purpose of CPR 3.14 to treat it as having no effect on incurred costs. The Defendant did accept that the Claimant was entitled to 50% of her costs from the date of expiry of the Part 36 offer under CPR 36.23.

The Defendant’s reading of Ali v Channel 5 was also challenged, with the Claimant pointing out that neither of the parties’ positions in that case was that the CPR 3.14 sanction applied to all incurred costs – the dispute was whether the sanction should be applied from the date the Budget should have been filed, or the date of the CCMC where Budgets were dealt with (which in that case was a difference of a year).

The Claimant pointed to a number of cases[1] where reference was made to the sanction only applying to ‘budgeted costs’, meaning future costs, but accepted that in none of those cases was that issue actually in dispute and so was not specifically considered by the court.

In giving Judgment, the District Judge held “it has always been my understanding that CPR 3.14 referred to the entirety of the budget. The word ‘budget’ is used as shorthand routinely by judges and advocates as the word which incorporates all costs and disbursements a party has or expects to incur”.

The District Judge made reference to the sanction intentionally being draconian, and that “it seems to me that the sanction would not be seen as draconian if it only referred to the budgeted costs”.

The District Judge concluded by finding that therefore the sanction applied to the entirety of the costs, including incurred costs.

The Claimant’s Grounds of Appeal included:

His Honour Judge Rawlings found that there are a number of anomalies in CPR 3 Part II, with there being no link on the face of it between CPR 3.14 and CPR 3.15 and 3.18. He did however find a clear intention that CPR 3.14 should fit with the other rules in Part II, and that this view outweighed the poor fit of CPR 3.14 and the remaining rules.

He noted that the Claimant accepted the word ‘budget’ (as used in CPR 3.14) includes both incurred and future costs, but found that CPR 3.14 is poorly worded, and the drafters of the rules may not have anticipated the effect of its literal definition.

Looking then at the aim of the sanction, HHJ Rawlings accepted the Claimant’s submissions that by only applying to future costs, the sanction has a stronger link to the default.

It was also accepted that all the authorities relied upon by the parties were supportive of the Claimant’s case, or at worst neutral.

HHJ Rawlings concluded by finding that CPR 3.14 was not a standalone contingent sanction and had to be read in conjunction with CPR 3.18. As per the rules, and as confirmed by the Court of Appeal in Harrison v University Hospitals Coventry & Warwickshire NHS Trust [2017] EWCA Civ 792, incurred costs are not within the ambit of CPR 3.18. CPR 3.14 could not therefore restrict the defaulting party’s incurred costs to court fees only, and the sanction only applies to future costs.

As mentioned at the beginning of this article, many may have thought that this outcome was an established position, however the fact the Defendant party ran this argument; the fact the District Judge advised he had always been of the understanding the CPR 3.14 sanction applied to incurred costs as well as future costs; and the fact that at first instance the Defendant succeeded in their argument all show that this may not have been as an established position as many may have been complacent in thinking.

It is also interesting that, as mentioned above, neither party could find any case where this issue had previously had to be decided by the court. The Defendant had relied on, and the District Judge accepted the Defendant’s reading of, the pinnacle case of Mitchell v News Group [2013] EWCA Civ 1537, submitting that the Court of Appeal in that case clearly proceeded on the basis that the sanction applied to incurred costs as well as future costs.

But the Claimant had an ace up her sleeve – in the form of Roger Mallalieu QC who was instructed by the Claimant on appeal, and who also acted in Mitchell. Mr Mallalieu QC was able to produce the Skeleton Argument from Mitchell in which it was confirmed that prior to the hearing both parties had agreed that the sanction only applied to future costs, and therefore the Court of Appeal proceeded on that basis.

Even so, there was admittedly still no evidence of this issue ever having been argued before, and therefore considered in depth by, the courts. The fact we do now have an appeal decision which confirms the Claimant’s understanding of the sanction is correct is therefore to be welcomed as hopefully warding off any future potential arguments on this point.