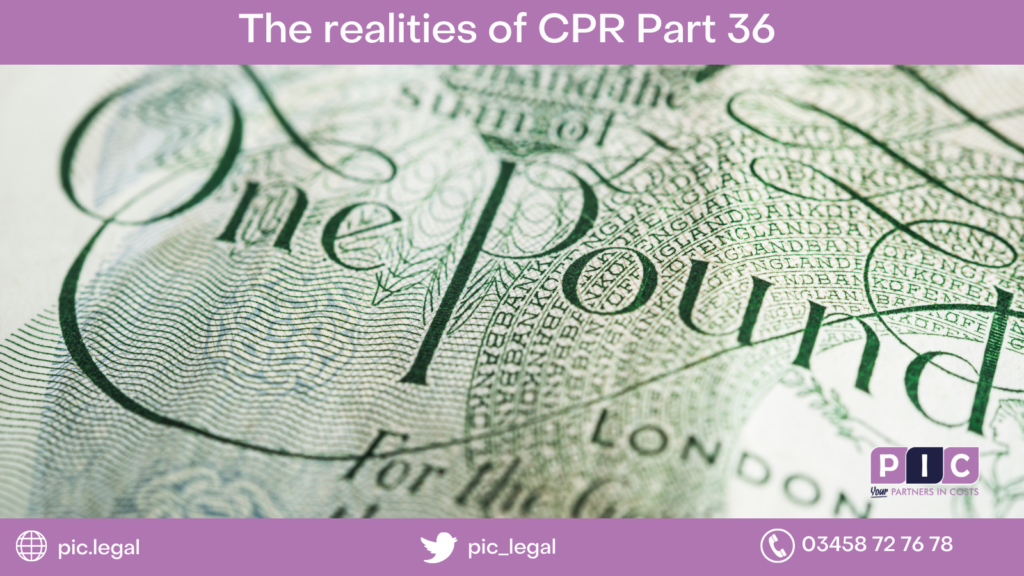 In Shah & Anor [2021] EWHC 1668 (QB) Mrs Justice Collins Rice upheld the decision of the trial judge that the Defendants should bear the normal Part 36 consequences when the Claimants had made a Part 36 offer for £1.00 in a claim in which they were only awarded £10.00.

Background of the case

The Claimants / Respondents to the appeal brought proceedings in a protracted and ultimately     expensive family dispute. The Claimants made a Part 36 offer to settle the claim for £1. At trial, the Claimants were successful, but were only awarded nominal damages of £10.00.

The Judge awarded the Claimants their costs including Standard Basis costs until 12.05.20, subject to detailed assessment, Indemnity costs from 13.05.20 until 19.10.20, again subject to detailed assessment as well as interest on the whole sum awarded by the Court from 13.05.20 until 15.10.20 at a rate of 2.5% above the Bank of England base rate per annum.

As is always the case, the awarding of costs is at the discretion of the Judge. CPR 44.2 refers:

(a) whether costs are payable by one party to another;

(b) the amount of those costs; and

(2) If the court decides to make an order about costs –

(b) the court may make a different order.

(3) The general rule does not apply to the following proceedings –

(b) proceedings in the Court of Appeal from a judgment, direction, decision or order given or made in probate proceedings or family proceedings.

(4) In deciding what order (if any) to make about costs, the court will have regard to all the circumstances, including –

(a) the conduct of all the parties;

(b) whether a party has succeeded on part of its case, even if that party has not been wholly successful; and

(c) any admissible offer to settle made by a party which is drawn to the court’s attention, and which is not an offer to which costs consequences under Part 36 apply.

(5) The conduct of the parties includes –

(a) conduct before, as well as during, the proceedings and in particular the extent to which the parties followed the Practice Direction – Pre-Action Conduct or any relevant pre-action protocol;

(b) whether it was reasonable for a party to raise, pursue or contest a particular allegation or issue;

(c) the manner in which a party has pursued or defended its case or a particular allegation or issue; and

(d) whether a claimant who has succeeded in the claim, in whole or in part, exaggerated its claim.

The general rule is that the unsuccessful party will be ordered to pay the costs of the successful party, but a Court may make a different order having regard to the “circumstances” of the case.

CPR Part 36 is a “self-contained procedural code about offers to settle”. Its policy is to encourage settlement of disputes without recourse to litigation. One of the ways it does this is by setting out the components and procedures for parties to make settlement offers, the refusal of which can have adverse costs consequences.

The consequences of CPR 36.17 (4) are mandatory, unless a Court considers it would be “unjust” to impose them.

In the First Instance decision, His Honour Judge Saggerson in the Central London County Court found that when deciding to award the Claimant their cost and the additional costs consequences of beating their own Part 36 offer the starting point must be CPR 36.17 and that the harsh, even brutal, default costs consequences of CPR 36.17 must be applied.

Comments were then made as to the disproportionate investment of time, energy, and costs incurred by both sides noting that this action was only the latest chapter in a sad story of family disfunction.

The Judge then ruled that he could not depart from the default position under CPR 36.17 simply because the rules themselves may appear harsh or produce a harsh result, commenting that the whole point of CPR Part 36 was to drive litigating parties towards a reality check such that they are prepared to “give” as well as “take” and to demand that reassessment is made on all sides, of entrenched positions.

Dealing with the discretion the Court has as to costs, the Judge commented that the departure from the costs consequences of CPR 36.17 whether in principle or in terms of the additional sums awarded can only be avoided where it is unjust to apply the rules or apply them to their full effect.

The Judge found that it was not unjust to apply the rules as governed under CPR 36.17 (4) awarding the Claimants indemnity costs from 13 May together with interest at 2.5% above base rate as not being unjust.

The Defendants then appealed against being ordered to pay costs, and the Claimants having the normal Part 36 consequences having beaten their own Part 36 offer. The same was dismissed.

The judgment of the High Court Judge held that the decision at First Instance was well within the discretion of the trial Judge.

Mrs Justice Colins Rice on appeal found that there had been no errors in His Honour Judge Saggerson’s ruling on which party had won, whether the Part 36 offer was effective and as to whether it was “unjust” for the Part 36 consequences to follow.

Ruling as to whether the Claimants’ Part 36 offer of £1.00 was genuine she found that:

So, the questions they had to go ask themselves were exactly how much they were prepared to stake on the liability issue, how likely they were to win or lose, how much more in the way of costs they were risking if unsuccessful, and whether to make a counteroffer.

Those are the components of the usual sorts of calculations parties have to make about whether to settle or not. Part 36 offers demand hard choices about the least worse alternative. The Part 36 code is specifically designed to make parties face up to these sorts of difficult decisions”.

The Judge acknowledged that the consequences of Part 36 in cases such as this were punishing, but it was a separate question as to whether they were “unjust” in which she went on to comment:

“On that basis, the Part 36 result was not an unjust windfall for the respondents, but the product of the appellants’ preference for a win/lose outcome and the hope of victory, over settlement which the judge found not to be a “request for total capitulation” in objective reality”.

The appeal was duly dismissed with the Defendant / Appellant being ordered to make an interim payment on account of costs in the sum of £75,000.00.

It is clear that the Courts have high regard to the rules surrounding a well-placed Part 36 offer as long as it is “genuine” in nature and the granting of the subsequent cost consequences if the same is beaten is not “unjust”.

Solicitors should use CPR Part 36 as an important tool to bring the parties to “the table” and enter into negotiations, as the penalties to a party who ignores the same as demonstrated by this case can be costly.

If you have made a Part 36 offer which you have beaten and the Defendant raises issues as to your mandatory entitlement to the costs benefits as afforded by CPR 36.17 (4), Partners in Costs can assist in dealing with any such arguments.

Partners in Costs can also advise as to the merits of making a well-placed Part 36 offer within the substantive proceedings to ensure at the conclusion of the case the Part 36 offer cannot be found not to be “genuine” and that within costs proceedings the Paying Party cannot say that it would be “unjust” not to afford any costs benefits as afforded by CPR 34.17 (4)