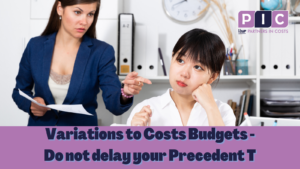 Following amendments to the rules in respect of revising costs budgets in October 2020, in Persimmon Homes Limited & Taylor Wimpey Homes UK -v- Osborne Clarke LLP [2021] Master Kaye made it abundantly clear that not every development in litigation warranted a revision of the last approved costs budget, even if that decision had costs consequences.  Instead, the Court had to consider whether there had been both a significant development and that it required the costs budget to be revised.

The case concerned an application made by the Claimants in December 2020, to vary their budget in respect of three significant developments of their professional negligence claim:

In December 2019, a CCMC had taken place before Deputy Master Linwood who had given case management directions and approved the Claimant’s budget in the total sum of £1.455 million, of which just over £1 million was future estimated costs.  In respect of disclosure, the parties agreed primarily Model C request-led search-based disclosure.  A further CMC was to be listed after the 8th May 2020.

Thereafter the Defendant served a Request for Further Information in February 2020, which was eventually responded to in August 2020.

Disclosure proved challenging and the directions timetable slipped.  On the 18th August 2020, the Defendant issued an application for further disclosure pursuant to PD51U.  The further CMC eventually took place on the 26th August 2020, whereby Orders were made in relation to the already outstanding disclosure and the CMC and the Defendant’s application was adjourned to a second further CMC on the 7th January 2021.  The timetable directed that the Claimant’s address the outstanding aspects of their disclosure by the 16th October 2020.

The Claimants submitted their Precedent T to the Defendant on the 3rd December 2020 and subsequently issued their application to vary on the 21st December 2020.  The Claimants sought to increase their budget to £2.8 million, including more than doubling future costs to £2.368 million.  The Claimants argued that at the time of the first budget being sealed, it had not been anticipated that the Defendant would have made a request for disclosure.  Subsequent further CMCs were said by the Claimant to also be a significant development which merited a revised costs budget.  By the second further CMC only three outstanding issues remained.  No further disclosure directions were sought by either party.  The Defendant did not pursue their disclosure application save as in relation to the costs of the application.

As a result of the above points the Master dismissed the application to vary the costs budget.

The Court heard that even before the first budget was set the parties had been unable to agree the approach to disclosure.  The Claimants said their costs budget as agreed by the Deputy Master was based on completely different disclosure assumptions.

Although Master Kaye indicated that these costs could be considered on detailed assessment, there was a risk that such costs would not be allowed on detailed assessment given the approved budget.  As such it was recommended that an application to vary the budget was submitted as soon as you become aware of a significant development in the litigation.

The case also highlighted the need for parties to consider their assumptions at the budgeting stage, particularly if there was a delay between the preparation and approval of the budget.  Parties should note that if there is a significant disagreement in respect of what was required in relation to a particular phase, then the Court may not hand down directions that are in line with the assumptions to that phase within the budget and as such it may be necessary to seek revision to the budget at the hearing if required.

Contact Partners in Costs for all your costs budgets requirements. Our training team provides updates and training on the timing and reviewing techniques for Precedent T’s.

Kelly-Anne Kent, Senior Costs Consultant, has been with Partners in Costs since 1998