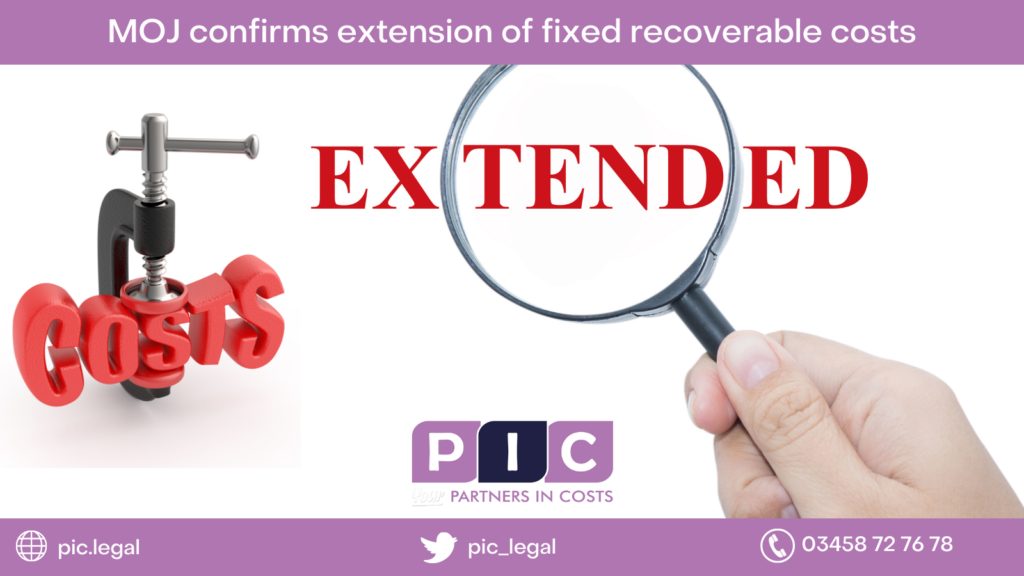 The Ministry of Justice has published its response to the consultation on the extension of fixed recoverable costs (FRC) in civil law cases in England and Wales.

It was confirmed there would be an extension of FRC to all cases in the fast track, up to a value of £25,000 in damages.

The fast track will also be expanded to include ‘intermediate’ cases, which it describes as “simpler” cases valued between £25,000 and £100,000.

All fast-track cases will be allocated to one of four bands of complexity, as set out in existing FRC regimes. Those bands are:

It was confirmed that Counsels’ fees will only be ring-fenced in Band 4 and in NIHL cases.

Should the Claimant wish to challenge the band of the claim and are unsuccessful, a costs liability of £150 will be incurred, however that will be kept under review.

The current provision in CPR 45.29J, enabling a party to exit FRC in the fast track in exceptional circumstances, will continue to apply.

The new rules include a greater emphasis on penalising delays in the resolution of cases. The government will implement an uplift of 35% of FRC where Part 36 offers are beaten, while there will also be a 50% uplift on fixed costs where one party has engaged in ‘unreasonable behaviour’.

There will be a 25% FRC uplift for each additional claimant, in claims that arise from the same set of facts.

The Government will implement a new process and separate grid of FRC for NIHL claims in the fast track valued below £25,000 in damages.

There will be certain mandatory actions required by both claimants and defendants in NIHL letters of claim and response.

The Government will expand the fast track to include ‘intermediate’ cases valued between £25,000– £100,000 in damages.

The existing multi-track court fees for new intermediate cases will remain, but will keep this under review.

Mesothelioma/asbestos, complex PI and professional negligence, actions against the police, child sexual abuse, and intellectual property will be excluded from intermediate cases.

The Government intends to retain the four-band structure (see breakdown above). They state the structure will allow for greater flexibility, to ensure that particular cases are matched to appropriate bands.

It will be the role of judges to exercise their discretion and ensure that intermediate cases are appropriately allocated. No intermediate case should be allowed to exit from the proposed FRC regime, unless there are exceptional circumstances.

It is anticipated that a new Practice Direction, similar to CPR 26.8, will be introduced to (i) give guidance on allocation, and (ii) indicate the information the court needs in order to make an appropriate band allocation.

An unsuccessful challenge to allocation will incur a costs liability of £300, and again this will keep this under review.

It is of course worth noting that challenging band allocation (or resisting a challenge) without sufficient basis could amount to unreasonable behaviour, incurring further costs penalties.

The new reforms will be implemented over the coming year, in conjunction with the Civil Procedure Rule Committee.