DBA’s and the case of Zuberi v Lexlaw 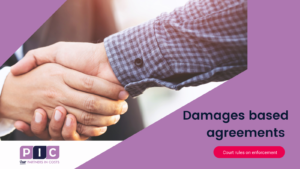 Litigation was brought by Lexlaw against Mrs Shaista Zuberi, in respect of the unpaid legal fees pursuant to the DBA made in April 2014. Mrs Shaista Zuberi sought to terminate the DBA with Lexlaw, after extensive work had been carried out and after a significant financial benefit of over £1 million had been obtained, achieved by Lexlaw.

Mrs Zuberi alleged that the DBA with Lexlaw was unenforceable under section 58AA of the Court and Legal Services Act 1990, and contravened the Damages Based Agreement Regulations 2013, because it included an obligation on the client to pay legal costs and expenses to Lexlaw on its hourly rates in the event of termination. Mrs Zuberi argued that Lexlaw was not entitled to any payment whatsoever.

“With the exception of the circumstances set out in clause 6.3 … you may terminate this Agreement at any time. However, you are liable to pay the Costs and the Expenses incurred up to the date of termination of this Agreement within one month of delivery of our bill to you.”

The key issue was that the DBA Regulations 2013 were poorly drafted. As a result, there was considerable uncertainty among the legal profession as to whether a termination clause triggering payment in the event of termination would be unlawful and/or would render the whole agreement unenforceable.

The need for clarity was of such importance that the Bar Council intervened in support of Lexlaw’s claim.

Having heard submissions from Nicholas Bacon QC on behalf of the Bar Council, the Court unanimously found that the DBA Regulations do not prevent termination payments being made to the solicitors.

However, in reaching this decision the majority of the Court of Appeal (Lewsion and Coulson LLJ) adopted a narrow interpretation of the meaning of “DBA”. The Court of Appeal found that the “DBA” does not compromise the entire retainer bur only those parts concerning the sharing of recoveries.

The problem as seen by Lord Justice Lewison is set out in Paragraphs 20 – 23 of the Court of Appeal Judgment.

Lord Justice Lewison set out in paragraphs 32 -34 the meaning of a DBA. (set out below)

What is a DBA?

“(a) a damages-based agreement is an agreement between a person providing advocacy services, litigation services or claims management services and the recipient of those services which provides that—

Lord Justice Lewison then considered whether this view was reflected in the Regulations as set out in Paragraphs 35 – 42.

On consideration of the same Lord Justice Lewison gave his ruling as set out in Paragraphs 43 – 46 set out below:

Lord Justice Newey agreed with Lewison LJ that the appeal should be dismissed but that the conclusion had been reached by a different route as set out in Paragraphs 53 – 73 of the Judgment.

Lord Justice Coulson also agreed that the appeal in this case should be dismissed and the reasoning for this can be found in paragraphs 74 -85 of the Judgment.

What can be learnt from the ruling?

The inclusion of a termination is permissible and does not render a DBA unenforceable.

Hybrid DBAs are also permissible and do not fall foul of the 2013 Regulation. This mean a DBA can be agreed which allows the solicitor to take on a case permitting a percentage of the recoveries in the event of a success, but also to charge a lower amount during the course of the case.

The Judiciary supported the view that there is nothing unlawful in a DBA which allows a solicitor to charge time-cost fees in the event of a loss, and a percentage of the recoveries should there be success. The court added assurance that should an agreement be entered into which might offend the DBA Regulations 2013, that term could be severed so that the remainder of the retainer would remain enforceable in any event.

What does this mean for Practitioners?

You should check the terms of the retainer, in particular whether the agreement contains a termination clause allowing your firm to charge hourly rates in the event of termination and a severance clause.

If your retainer does not provide for your firm to be paid on an hourly rate, you should seek to amend the DBA to allow you to do so in the event of termination.

Explain clearly to the client any amendments which you wish to make (supported by file note) to ensure that an informed consent is given.