Does your witness evidence fall within that as allowed by the Court? 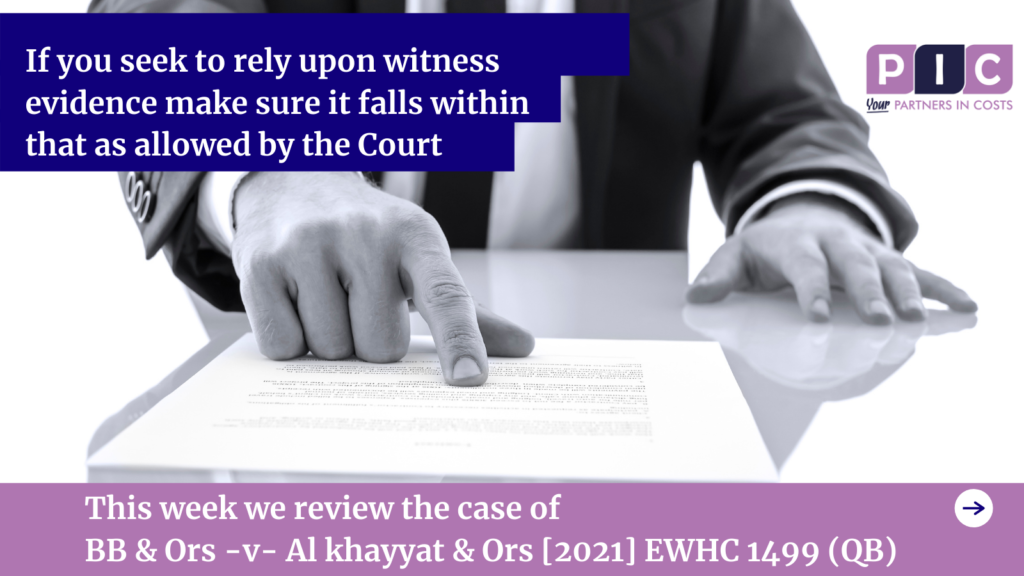 In BB & Ors -v- Al Khayyat & Ors [2021] EWHC 1499 (QB) Mr Justice Chamberlain allowed, in part, an application by a Defendant that certain evidence put forward by the Claimants in relation to an application do be excluded.

An action had been brought by eight Syrians (the Claimants) who resided in Holland and benefited from an anonymity order dated 29 July 2019, for damages they allege to have suffered in Syria as the result of unlawful actions of a terrorist group called the Al Nusra Front (“ANF”).

The First and Second Defendants were international businessmen based in Qatar. The Claimants alleged that they were closely connected to the state of Qatar and that, as part of a plan to which the state was party, they provided finances to ANF by causing large sums of money to be withdrawn in Turkey and/or Lebanon and carried over the border to Syria. These finances are said to have been passed to ANF, facilitating their terrorist activities, including those which caused harm to the Claimants.

The Claimants case was that the Defendants knew, or ought to have known that the funds were intended for the ANF and that the Doha Bank (the Third Defendant), in allowing such funds to pass through their accounts, acted contrary to international and Syrian Law.

On 24 December 2019, the Third Defendant applied for a stay in proceedings on the grounds of forum non conveniens, on the basis that neither they or the “Al Khayyat brothers” were residents in England & Wales and that the case should be held in Qatar. The stay hearing was listed for 3 days between 16 November 2020 and 19 November 2020.

A week before the listing window, the Claimants applied for an adjournment on the basis that in the period running up to the hearing there had been a conspiracy, committed by agents of the State of Qatar, to pervert the course of justice and “derail” the proceedings. The Claimants application would come before HHJ Cole, sitting as a High Court Judge on 11 November 2020 when matters would be adjourned as requested. In an order dated 11 November 2020, the judge gave directions for the Claimants to file evidence by 8 January 2021 “limited to events said to have occurred prior to 9.00 am on 11 November 2020”. The Claimants were also given liberty to apply for permission to serve additional evidence “regarding events of a different character, or a different order of magnitude, from the events said to have occurred prior to 9.00am on 11 November 2020”.

Following the submission of various witness statements by the Claimants in January 2021, the Third Defendant issued an application on 18 May 2021 seeking amongst other things to strike out or exclude certain evidence served by the Claimants for the purposes of a hearing listed in October 2021 to determine Doha Bank’s application for a stay in proceedings on the grounds of forum non conveniens (“the stay hearing”) and for certain associated directions.

Matters would come before HHJ Chamberlain, sitting as a High Court Judge on 24 May 2021.

In January 2021, pursuant to the order, the Claimants served a number of witness statements, with exhibits (seven statements in total). Taken together, the evidence as served covered a very wide range of subjects and travelled far beyond the alleged attempt to interfere with the proceedings with much of the evidence relating to things said to have been done by the AL Khayyat brothers and others on behalf of the State of Qatar many years before the proceedings began.

For Doha Bank, Ms Brown submitted as follows. The order read in context, permitted the Claimants to file further evidence of the alleged attempts to interfere with the proceedings taking place between 9 October 2020 (the date on which Doha Bank filed evidence in response to the Claimants’ evidence for the jurisdiction hearing) and 9am on 11 November 2020. The vast majority of the Claimants’ evidence related to:- the substantive merits of the claim; attempts to interfere with the proceedings which are alleged to have taken place before 9 October 2020; or the Claimants’ inability to obtain a fair trial in Qatar.

Ms Brown submitted that filing such wide-ranging evidence was an abuse of process and that various evidence as submitted by the Claimants should be excluded.

Submissions for the Claimants

Mr Emmerson submitted that Ms Brown was interpreting HHJ Cole QC’s order too narrowly saying that it was important to understand that there had been a change in the Claimants’ legal representation shortly before the adjourned application. The Claimants’ former representatives had withdrawn on 26 October 2020 and the new ones (Mc Cue & Partners) had been instructed on 5 November 2020 and that one of the purposes of the adjournment was to allow the Claimants’ new representatives time to review the claim and file any additional evidence relating to events prior to 9.00am on 11 November 2020 and that there was no “fair basis” for limiting the evidence which occurred before that date but after 9 October 2020 or the allegations of perverting the course of justice.

Mr Emmerson then drew attention to the submissions he had made before HHJ Cole that there had been a conspiracy on the part of the State of Qatar to pervert the course of justice and that this would go to the heart of the jurisdiction hearing and that it would be extremely difficult for the Court to form a view on the allegations of interference with these proceedings based on the witness evidence which had been filed prior to 9 October 2020. Mr Emmerson therefore sought an adjournment so that the allegations could be “properly investigated”.

Mr Emmerson further submitted that it was artificial to separate the parts of the Claimants evidence which go to the substantive allegation of terrorist financing from the parts which go to the allegations of perverting the course of justice. Although the witness interference issue is important too, and if substantiated would be determinative of, the question whether a fair trial in Qatar was possible, it was not capable of being pleaded. Accordingly, the Court will need to have regard to witness evidence and expert evidence, including that contained in the Claimants’ evidence served in January 2021 and not just the Particulars of Claim.

HHJ Chamberlain duly referred the parties to CPR 32.1 which gives the Court power to control evidence in particular CPR 32.1 (2) which includes:

“The power to exclude evidence that would otherwise be admissible. That power must be exercised in accordance with the overriding objective which as noted above, ensures that the case is dealt with expeditiously and fairly and allotting to it an appropriate share of the Court’s resources, while taking into account the need to allot resources to other cases”.

The Judge then had to make a ruling as to precisely what HHJ Coe QC had intended by her order. Mr Emmerson on behalf of the Claimants submitted that she had in mind the need for the Claimants’ new representatives to have time to consider the case and to file further evidence generally, not limited to interference allegations. Ms Brown on behalf of the Third Defendant submitted that the intention was to limit the permission given to evidence relating to events taking place in a particular time window and that, in context, this meant the interference allegations.

It was decided by the Judge that three issues were clear:

HHJ Chamberlain advised that he would approach the Third Defendant’s application to strike out or exclude parts of the Claimants evidence served in January 2021 on that basis bearing in mind that HHJ Coe QC had not even seen the evidence that he had seen and that it was for him to decide whether any parts of it should be excluded from the materials before the Court at the stay hearing.

In handing down his judgement as to the issues over the Claimants’ witness evidence HHJ Chamberlain advised that the correct approach to this issue would be:

(a) It is vital that the judge who hears the stay application should understand the scope and nature of those allegations. A party might be perfectly able to secure justice in a particular forum in respect of (for example) a private commercial dispute with another party, but unable to do so where (for example) the dispute implicates persons with strong links to the Government of the forum State.

(e) The requirement that this summary should take the form of a pleading will serve two important purposes. First, it will focus the minds of the Claimants’ representatives on the question of which material contained in the evidence can properly be pleaded. This will impose a salutary discipline on the way the underlying dispute is described to the judge. Second, it will relieve the judge of the need to read large quantities of evidence about the underlying issues and enable him or her to concentrate on the evidence about the suitability of the forum (which itself is extensive).

(f) However, evidence which relates not to the underlying allegations but to the alleged interference in these proceedings by the Defendants or agents of the State of Qatar should be before the judge, because this evidence is directly relevant to the suitability of the State of Qatar as a forum. I will not limit that evidence to matters occurring since 9 October 2020, because HHJ Coe QC’s Order did not contain any such express limitation. I will permit all of the Claimants’ evidence which relates to alleged attempts by the Defendants or others on behalf of the State of Qatar to interfere with the course of justice in these proceedings. At present the Claimants have not identified any parts of their evidence going to these issues beyond those referred to in paragraph 30 of Doha Bank’s skeleton argument, but I will give a further opportunity to the Claimants to do so, and for Doha Bank to respond, in the light of the approach I have outlined in this judgment.

For these reasons, Doha Bank’s application succeeds in principle and that he would set out the precise passages of the Claimants’ evidence which shall be excluded from consideration at the stay hearing once he had received the parties’ submissions.

It is important to remember that if an order is made limiting a party to file evidence between a defined time period or to provide evidence limited to a certain issue, then that evidence should be limited as defined by the Court unless there is just reason to do so.

If there is any doubt in a party’s mind, clarification should be sought from the Court either verbally at any application hearing for example, or by written submissions to the Court as it is in all parties’ interests to ensure that time and expense is not wasted if some of the evidence as filed cannot be relied upon.

In preparation for any hearing in which costs schedules are required, our costs experts can ensure that the appropriate of costs are claimed with reference to any Court direction or order, liaising closely with you to ensure that the directions or order are interpreted correctly.