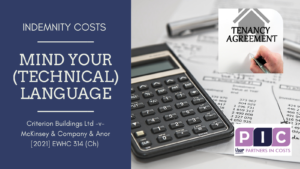 This case involved an unsuccessful challenge by a commercial tenant in an action for unpaid service charges brought by the landlord.

The tenants, who occupied part of a commercial building, had defended the claim on various bases, including an argument that the landlord’s apportionment of the service charge between them was unfair. The court determined in the landlord’s favour with the tenants accepting in principle, they should pay the landlord’s costs. An sum on account of costs was agreed by the parties, however there was disagreement as to the basis for assessment. It was therefore necessary for the court to determine the basis on which costs should be paid.

The Claimant relied on the contractual provisions in the various lease documents and on the conduct of the Defendants, arguing that this took the matter outside standard costs and that indemnity costs were therefore applicable.

When weighing the appropriate basis for assessment HHJ Matthews used a three-pronged approach.

Secondly he proceeded to consider the contractual position.

The Claimant had produced three lease documents to support their contractual argument for costs, an underlease, a supplemental lease and a further lease to show that the Defendant had covenanted to pay all of the lawyers’ costs of proceedings to recover arrears of service charge. The clauses in the lease documents referenced by the Claimant did indeed contain covenants to pay such costs and expenses, including solicitors’ costs. However, they used sightly different terminology. In relation to the underlease and the further lease the reference was to expenses “properly incurred” by the landlord. In relation to the supplemental lease it was noted there was no limitation to expenses “properly” incurred, but instead the covenant was to pay “all costs, charges and expenses which the Landlord may from time to time incur…”.  The supplemental lease was for a term of only a little more than six months, so the amount claimed attributable to that lease would be limited.

The Claimant relied on the decision made in the Court of Appeal in Macleish v Littlestone [2016]  WLR 3289 where Briggs LJ, faced with a contract of similar wording, had determined that indemnity costs were applicable. HHJ Matthews agreed with this decision.

The Defendant’s resisted this approach and sought to rely on the case of Primeridge Ltd v Jean Muir Ltd [1992] EGLR 273, arguing that the wording in this case was indistinguishable from the decision in Primeridge where the court interpreted the inclusion of the word “proper” within the covenant  “to pay the landlord all proper costs” as an award of standard basis costs. They argued that in the present case the phrase “properly incurred” in the covenants of the underlease and further lease effectively meant the same thing as the “proper costs” in the Primeridge case.

This was not accepted by HHJ Matthews who decided that the decision in Primeridge was flawed and declined to follow it on the basis that:

CPR trumped the case law of Primeridge due to the age of the case and its’ pre-CPR nature. Secondly, the phrase “proper costs” in the case was not the same as “costs properly incurred” as something may be a ”proper cost” in the sense that it would be appropriate in some circumstances to incur it, and yet not “properly incurred” and in the sense that the circumstances pertaining were not such as to make it appropriate to incur it.  And thirdly that the argument in relation to the phase “proper” should make a difference was flawed as no improper costs can be unreasonably incurred. HHJ Matthews therefore considered the contract was consistent with an indemnity costs award.

HHJ Matthews agreed with the approach of Briggs LJ in Macleish (subsequently agreed in the case of Falafoco)  who had considered that the absence of a statement as to the reasonableness of costs made no difference and did not preclude an indemnity costs award and in addition there was nothing restricting costs in the present lease to what was proportionate.

HHJ Matthews therefore determined that the terms of the lease were such that an award on the indemnity basis would best reflect the contract between the parties.

Finally, as a cross-check, HHJ Matthews considered the matter on the basis that Primeridge applied so as to preclude an indemnity costs award based merely on the contract and considered the conduct argument raised by the Claimant. Following consideration of the same he decided that it would be appropriate to order indemnity costs against the Defendant on this basis alone, had he not already decided to do so.